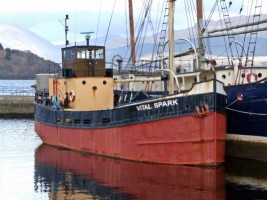 Two vessels almost as diverse as it is possible to be, while still remaining seaworthy, take to the virtual waves this week – a historic sailing ship named after a poetic shirt and a fictional steam puffer named for the fire in its belly. Built on the Clyde in 1869, The Cutty Sark is amongst the last of the tea clippers to be built but was acclaimed as one of the fastest. She is one of only three remaining wooden hulled, iron framed clipper ships from the nineteenth century and has been on display in Greenwich as a museum ship since the 1950s.  At the other extreme, The Vital Spark, although typical of the puffers that plied the West Coast trade up until the 60s or 70s, is an entirely fictional vessel. Created by Neil Munro in the early years of last century, she is captained by the wily Para Handy whose adventures, first appearing in print in 1905, went on to feature in several BBC television series. Although a number of original puffers still survive, many are in dire need of restoration.

Family Motto – “Where there’s a Willis away”

John – ‘Jock’ – ‘Old Stormy’ – Willis
ran away from his Eyemouth home, aged fourteen
stole over the Scottish Border, headed south to London
and sailing ships, scrambled up ratlines, slithered along courses,
raged at the sea with all his might, untied gaskets, hoisted sails
hauling hemp rope to the ‘two-six-heave’, rode the bowsprit,
scrubbed the decks, caulked to the rhythm of the melody
in his throat responding to the call of the shantyman,
worked in a pub in New India Dock – ‘Canary Wharf’ to you –
fixed musical instruments for jolly jack tars, saved his wages,
weighed his anchor, became a Sea Captain and builder of ships.

Junior John – ‘Jock’ – ‘Old White Hat’ – joined with his father
and their union spawned me at Dumbarton on the River Leven.
My design echoes City of Adelaide, also known as Carrick, the first
composite clipper ship, built in Sunderland, my iron ribs fleshed
with finest Rock Elm fetched from Canada and North America
and Teak from East India and Burma.  My bottom is silken,
like Kylie Mynogue’s in those hot pants, gleaming in copper
making it smooth, sleek to slice through wild waters
in peak performance.  I broke the back of Scott & Linton,
was completed by Denny Brothers.  They were all there
when they named me Cutty Sark in November 1869,
and I was towed to Greenock for my rigging –
twenty-nine sails to capture the breath of uncertain winds
in 32,000 square feet of canvas.  I pranced at my tethers like Meg
with Tam o’ Shanter on her back at Kirk Alloway till they fled
from that ‘unco sight’ and crossed Brig o’ Doon, left her tail
in the snatching hands of Nannie Dee, the witch trapped now
bare-breasted in my prow in her short slip that gave me my name.
Our ceilidhs with the winds and seas were legend as we made
for China, raced back with the new season’s teas.  We danced
hornpipes, jigs, strathspeys and reels together, eight times.

But the week I was launched was the week the Suez Canal
opened up, gave a shortcut to shipping, an access that cut out
the need to round the Capes of Good Hope or Horn.
Steam ships rose to hot favourite, odds-on to win, hissed
down my neck – they were not reliant on the whims of the winds,
never ended up in the Doldrums so I was given a new life
beating back from Australia, with wool in my hold.

There is more.  I have carried cargo, trained cadets, survived
two fires at Greenwich where I find myself stuck high and dry
in a glass wave with Nannie Dee shaking Meg’s tail at Canary Wharf,
as though she and Tam had just escaped across the River Thames.
I never thought I would be stranded like this.  Cup of tea, anyone?
Or a wee dram of Cutty Sark blend, perhaps?

The Vital Spark
by Donny O’Rourke

Which long forgotten birthday did it mark
That match-less model of The Vital Spark
Run aground on a Glasgow bathroom shelf?
My friend, an Inveraray man himself

Inlets, isles, kyles, canals, the wild west coast
The time served tool- maker’s, mariner’s, boast
That he never went under, just below
Saved from the Depression by Neil Munro

Who gathered those stories in ‘thirty one
When Dad made a glorified gabbert run.
In gansey, oilskin, cap and rubber boots
Dan plied the coastal trade’s old birlinn routes

On a cut off islet, girls’ grateful cries
When we came ashore with a month’s supplies.
Or was it the ‘Maggie’ that eased folk’s plight?
Ealing’s changed names, pirating copyright

To watch with father was to hear him state
The need to recognise, Dougie, The Mate
(‘Hugh Foulis’s fables were nom de plumed
TV identities went un- assumed)

A twilight ceilidh, across sparkling seas
A last, wistful waltz, in the Hebrides
Where Sunny Jim’s melodeon will play
The day that puffer carries me away

Scaled down. Not diminished. Oceanless. There.
Dream boat, Atlantic breakers shan’t deter
If the clapped out engines pass the chief’s test
We will both set out on the voyage west

Rita Bradd has been writing poetry in both En

glish and Scots for several years and has been published in several anthologies.  Her debut pamphlet with Red Squirrel Press is due out in 2017. She voyaged from Rotterdam to  Adelaide on a cargo ship during the winter of 2013/14, accompanying City of Adelaide, whose design was later adopted for the building of Cutty Sark.  She is currently writing a book of her experiences on the voyage.

A graduate of the Universities of Glasgow and Cambridge, Donny O’Rourke has had overlapping careers as a poet, journalist, broadcaster, television executive, film maker, translator, editor, song writer and academic. He has held professorships,  residencies, stipends and bursaries in many countries and been the recipient of various awards. With more than a score of books and CDs to his name, Donny teaches Poetry and Film at the University of Glasgow of which he is an Honorary Fellow.