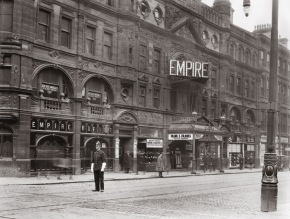 We celebrate Glasgow nightlife past and present this week – when Scotland goes out on the town it often ends up in a place much like one of our two subjects. In years gone by, the Glasgow Empire was the leading music hall and variety venue in the city for nearly 70 years until its closure in 1963. Situated on Sauchiehall Street, it was one of the national chain of theatres owned by Sir Edward Moss, playing host to many of the top singers, comics and entertainers through the golden age of variety from 1930-1960. Despite aspiring to gentility in décor and high-class entertainment, it developed a fearsome reputation as being a difficult ‘house’ to win over, and proved to be the graveyard of many an act (particularly if they were English). By contrast, the Glasgow Barrowland ballroom (opening on Christmas Eve 1934) was a less genteel venue situated to the east of the city centre, adjacent to the ‘Barras’ market. Maggie McIver, ‘Queen of the Barras’ and founder of the ballroom, died in 1958 which was gutted by fire soon afterwards, but the rise of popular music which did for venues like the Empire proved to be the lifeblood of the Barrowland. In its time it has played host to acts as diverse as Lulu, The Clash and Oasis, despite achieving grisly notoriety as the haunt of murderer ‘Bible John’ in the late 1960s. Again, the contrast between venues is in aspiration – one a gilded palace of variety, the other a more rough-and-ready dancehall, but both made intimidating by the demanding Glaswegian audiences who frequented them.

I Remember Your First Time
by Colin Begg

Out past the Sarrie Heid
hugging the north side of the road
your pupils narrowed
at lights blazing: Barrowland!!

Past the louts, through the touts,
frisked by stout bouncers,
through the metal detector
up the mirrored stair to the bar:

After a final sound check,
(one, two        two      p-pow!)
(because roadies can’t count to three…)
the bands always start
with a darkness
a stage of shadows
a spreading cheer
a press-forwards
lights! anticipation! feedback!
We find a place, on the left.

You turned with a barbed wire kiss,
caught my mood:
moving up and still alive,
still like honey.

Liz Niven is a poet writing in Scots and English. Her last collection, The Shard Box, was a Scottish Libraries Summer Read. Awards include McCash/Herald and, TESS/Saltire for her groundbreaking work for the Scots language in education. She is Poet-in-residence at Inverness Airport, has had poetry engraved in wood and stone in southwest Scotland and also on Temple Forest folly. She is an honorary Fellow of the Association of Scottish Literature and an executive member of Scottish PEN.

Colin Begg is a writer, editor & doctor from Ayrshire, currently working for the NHS in Glasgow. He is co-editor and co-founder of Gutter magazine. His poems have appeared in many periodicals, from Poetry Scotland to The British Journal of Psychiatry, as well as several small anthologies and four New Writing Scotland annuals. He is a previous recipient of a Hawthornden Fellowship and a Clydebuilt Poetry Apprenticeship. In 2013 he won the Basil Bunting Poetry Award.  He is currently working on his first poetry collection.