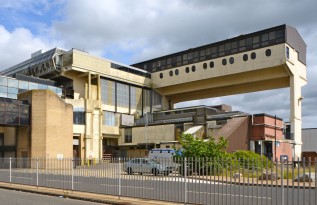 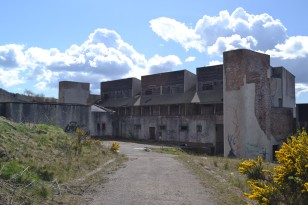 Scotland has been rightly lauded for the quality of its architecture over the last few centuries (an area we’ll be exploring in future postings), but this week we look at two less-well-loved examples of the art of town planning, both of which have been termed ‘ghost towns’ – one of which unfairly bears that label and another for which the epithet is all too apt. The modern Cumbernauld new town was created in the mid-1950s as a Glasgow overspill on the site of a long-existing settlement, and was envisaged as a new kind of community, laid out on energetic modernist lines. By the late 20th century it had become something of a joke, winning many awards for its unloveliness, including ‘worst town in Scotland’ in 2002. Its soulless concrete features were captured in the 1981 movie Gregory’s Girl and, despite a resurgence in its fortunes (it was voted as Scotland’s most improved town in 2010) its name is still used as shorthand for the brutalist follies of 20th century urban planning. Polphail is the village that never was; situated on the Argyll coast near Portavadie, it was built to house construction workers and their families for a 1970s West Coast oil boom that never materialised. Having never been occupied, it now lies abandoned and derelict, although it has recently been reclaimed as a living canvas by the art collective Agents of Change. These examples of Scotland’s less palatable architectural heritage demonstrate two aspects of the character of Scotland; either to keep going and make things better, or to know when something has failed and make some sense of what is left.

Arria reaches out to you,
her steel arms raised as if in praise of you,
poor fading monument to concrete.
Perhaps she admires you doing it the hard way,
perhaps she’s begging for your people to stay.

Turning their backs on communities of squalor,
Glaswegians spilled gladly to your hope of the new,
dreaming of lives in your town for tomorrow,
a house with a garden, and its own front door.
As kids they would play in the middens,
peever, kick the can, or heiders up the close.
We were indulged with pristine playgrounds
of witches hats, roundabouts and swings.

But we discovered the other face of you,
the one beyond order, underpass and ramp,
with their gaudy psychedelic flowers
and abstract Modern art.
We found our place down the Glen,
in the remnants of the Caledonian forest,
wading waist high through your jungle of ferns,
treading your carpets of bluebells,
among hornets’ nests, midges and frogs.
We’d make for the gorge and the long stretch
of pipe that towered over the trickling burn,
crawl up to its slimy, curving edge
and walk within an inch of our lives.
We’d swing from frayed ropes tied to branches,
boldly reach for the other side, hoping
for freedom from the Lego fantasy
made by your planners’ utopian dreams.

Never mind what’s it called and the ridicule
of Carbuncles; a likeness of Janus
should be carved on all your walls.

I have long had this premonition
of a bright day and a deserted house.
Anna Akhmatova

Only the bodies of birds, bats and sheep

so when we come here, we become bird-like,

a cairn of stones – a small body

curled in the corner of a muddy couch.

and somehow my body feels as unlived-in

and crumbling as the houses

How they speak to us – the door

hanging off its hinges; the emerald

puddle of algae in the bathtub;

glass shattering under our boots.

A flight of stairs step off mid-air

the enormous face of a woman –

The hardened spines of winter gorse

are closing in, the tarmacked ground fractured;

its cracks matching the heart line,

head line and life line on my left hand.

We walk through the Polphail inside of us –

smashed up houses, writing on the wall.

They call it a ghost village

but there are no ghosts here, simply

another expression of ourselves.

Irene Hossack’s poetry has most recently appeared in Double Bill, Gutter, Long Poem Magazine and Causeway/Cabhsair, and her poems are included in North Light: The Anthology of Clydebuilt 3 (Dreadful Night Press). She studied at Monash University, writing her doctoral dissertation on the poetry of Geoffrey Hill, and her Masters on the poetry of Charles Simic. She teaches creative writing in the workplace, and creative writing and English language at The Open University.

Marion McCready lives in Argyll. Her poems have been published widely including in Poetry, Edinburgh Review, The Glasgow Herald and Be The First To Like This: New Scottish Poetry (Vagabond Voices, 2014). Her poetry pamphlet collection, Vintage Sea, was published by Calder Wood Press (2011). She won a Scottish Book Trust New Writers Award in 2013 and won the Melita Hume Poetry Prize (2013). Her first full-length collection, Tree Language, was published by Eyewear Publishing (2014). She has a sequence of poems titled ‘The Birth Garden’ in Our Real Red Selves, a poetry anthology published by Vagabond Voices (2015).